Food, Education, Energy & Development e.V. (F.E.E.D.) was founded as a not-for-profit association in 2020 on the initiative of Peter Schrum, an entrepreneur from northern Germany. The organisation is based in Hamburg. In addition to providing food aid, F.E.E.D. supports projects which aim to combat malnutrition, raise awareness of the importance of a healthy balanced diet, and impart practical knowledge about ecologically sustainable agriculture in a way that enables those in need to provide for themselves, find work or start their own businesses.

‘My goal is to create a better world for our children and our children’s children. This is why I am working in a professional and personal capacity to combat poverty and malnutrition and to promote sustainable protection of the environment.’

In 2004, Peter Schrum,, the founder of F.E.E.D., started the SUNfarming GmbH in Erkner near Berlin with business partner Martin Tauschke. The company ranks among the top 10 solar energy development and investment companies in Europe. One of the unique product concepts it has developed is a multi-functional system, where the production of renewable energy is combined with the ecologically sustainable production of food using resource-conserving technologies, and with training programmes in schools and universities, which give individuals valuable qualifications for the job market, create new jobs, and lead to increased opportunities for entrepreneurship.

For over 15 years, SUNfarming has been working in many different countries in Africa, eg. South Africa, Namibia, Uganda, Togo and Madagascar. In 2016, SUNfarming built the first ‘Food & Energy Plant’ in Africa, designed on these holistic principles, on the Campus of the North West University in Potchefstroom, South Africa. The company had already achieved recognition for the innovative concept of the ‘Food & Energy Plant’ and received numerous awards. 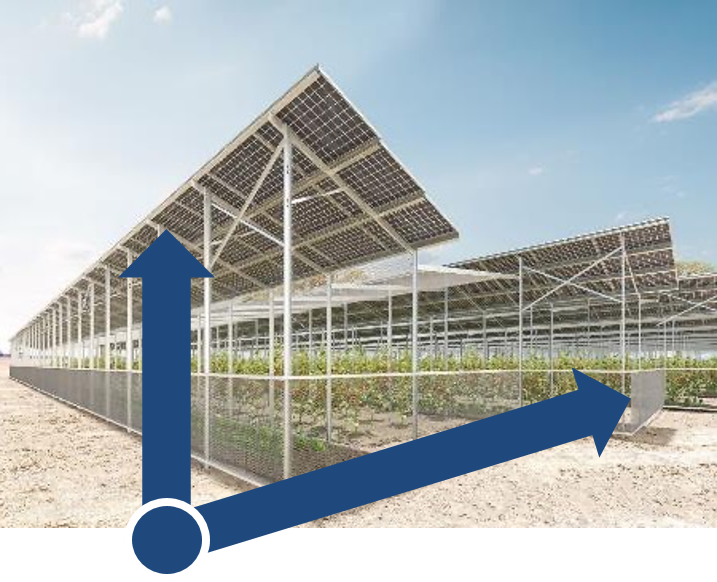 Sunlight shines through the glass-glass modules, allowing the cultivation of vegetables and medicinal herbs.

Because the modules are raised three to four meters high, the production of corn is also possible.

The greater distance between the rows of solar panels – four to five meters - means that plants can be grown hydroponically and animal husbandry (eg. poultry, sheep) is also possible.